Difference between revisions of "Frontier Fork"

Smallocracy was originally developed by me in the year 2008.[1] It was inspired by the concept of Arcology (Architecture + Ecology) by Paolo Soleri[2] as well as the Victory Cities concept by Orville Simpson II[3]. The content below presents an alternative architecture for Smallocracy different than I originally proposed at http://academia.wikia.com/wiki/Smallocracy. This particular design maximizes light penetration, inspired by increasing preference for a more light and airy design. S.H.O. talk 13:10, 20 October 2016 (PDT)

The solution for this begins with Smallocracy which proposes the least radical change, and is therefore more feasible to attain from our current situation. At this stage, the leadership will be held in partnerships between real estate developers and municipal corporations with the objective of satisfying both the needs of each. The vision with Smallocracy is to develop a balance between both vertical and horizontal town development which permits the elimination for the need vehicular transportation except when transporting goods or people into or out of each town. The intended results are significant reductions of 90% or greater for common infrastructure-related expenses typically associated with a town, all without sacrificing living space. An article concerning the proposal for a town-in-a-building called Victory City presents list of things which could be eliminated or greatly reduced.[4] 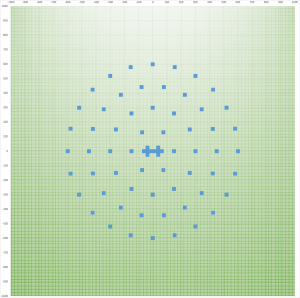 Instead of relying on a monolithic building like most city-in-a-building ideas, in the case of Smallocracy, one option is to use steel suspended foot-bridges like the "Drac bridge" and "Ebron bridge" in France which could be used to provide direct horizontal connections. Cost and time of bridge construction could be reduced substantially using drone lifts. These bridges would connect to platforms (20 m x 5 m) every three stories between gate-like twin towers (120 m x 25 m x 10 m) which together with the platforms have a footprint of 500 square meters (25 m x 20 m). These gate-like twin towers would be constructed out of mass timber with no more than two units per side per floor. Area per floor per unit will be limited to 100 square meters (1 are), with larger homes requiring more floors, up to 3. There should be no more than three floors between deck levels and no more than 9 deck levels with a total height no more than 30 stories. Each slender tower should be capable of residential square footage up to 12,000 square meters supporting approximately 60 two-story "Houston-sized" residences or 120 single-floor "NYC-sized" residences, with an estimated combined population of 150 to 300 people, assuming 2.5 people per household. Each tower therefore eliminates between 65 and 130 cars at time, assuming the American average of 439 cars per 1000[5] replacing them with 9 steel suspended foot bridges. The floor plan of the structure could be rotated by a gradual angle at every deck level to increase architectural variety, and total height should be capped at 120 meters. There should be 4 meters between floors so as to permit vaulted ceilings and loft arrangements in all units. All residential units must have windows on at least three sides and come with a separate dining room, utility room, master suite, and a second bathroom.

In close proximity to the slender residential towers, are two similarly-constructed "hub towers", one for non-hazardous manufacturing, warehousing, and other miscellaneous light industrial activities, and another tower for retail, recreational activities, education, and day care. Hospitals and other essential services would be evenly split between the towers. Each would have a slender foot print comparable to five of the gate-like residential towers arranged as an plus-sign for better visibility. The foot print of each "hub tower" occupies five 25 m x 20 m areas for a total of 5000 square meters for both towers. At the bottom of each hub tower, will be an atrial garden, professionally-managed food court, hotels, and theater hall which doubles as a commercial cinema. Retail outlets would line the path from the cinemas to the garden trails which provide connections between greenhouses, hardware stores, maker spaces, and sports venues.

These "hub towers" must be within a 6 minute walking distance for healthy seniors, or about 600 meters,[6] to any residential tower in the district, for a maximum 12 minute walk between any residence in the 1.2 kilometer diameter circle. The hub towers will have a total floor area around 100,000 to 150,000 square meters depending on ceiling height and may support the residents and visitors for around 60 twin residence towers, which will have a combined living area of 720,000 square meters (or 0.72 square kilometers) of living area, for a district population somewhere between 9,000 and 18,000 people. The results in a population density potentially higher than New York City with average residential floor area per person between 80 and 40 square meters, and this doesn't even include the yard space. The gross circular foot print of each hub region including residential towers, hub tower, yards, Lazy River/amusement track, etc. should be approximately 1.13 square kilometers compared to the estimated 0.035 square kilometers of physical building footprint, which provides over 96% of the land within district limits, or about 1.1 million square meters (110 hectares) for non-tower area which may be reserved for yards, gardens, recreation, lakes, ocean, and wild habitat. Six bowling pin-style arrangements may be adopted for the residential towers, which provides the 60 twin residence towers or (1+2+3+4)*6 divided evenly in 6 groups of 10 in six 60 degree segments, with each tower pair being spaced from the other far enough from the other to fit a soccer stadium or one of the aforementioned 1 hectare plots.