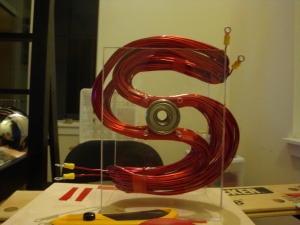 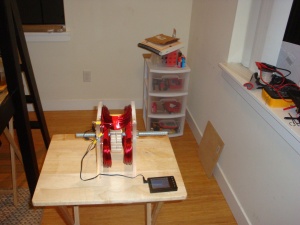 The magnets were not assembled according to the most recent planned design at (https://www.youtube.com/watch?v=huy53KdwAE4) due to difficulties encountered during the assembly procedure. The magnets that were purchased "insisted" that they form a rod-shaped magnet. As a result, it resembled an earlier design (based on a magnet stack of dimensions of 6" x 1.5" x 1.5"). The most recent planned design (https://www.youtube.com/watch?v=huy53KdwAE4) is very different than prior plans of the S.H.O. Drive because it was uncertain that earlier designs would work at all.
The key issue with earlier designs was that the original thinking was that the influence of the side fluxes were minimal and so that the magnet would operate by interacting with the magnetic field that was inverted in the center. As it turns out, in the original geometry, the side fluxes account for about half of the magnetic flux linkage in the system. Subsequently upon realizing this mistake, it was originally thought that the variation of the intensity of the magnetic fields at the outer radius of the "S" coils would cause attraction that would cause rotation in the desired direction when the magnet was angularly displaced through horizontal angles (-/+ 45 degrees). However, it was also known that if the arms were too short that there would be a "sticky spot" where the magnet would slow down, although whether it was to a stop was at the time yet to be determined.
Since the coils were made before I had botched the magnet assembly, I was unable to adapt the coils according to the new plan because they were made shorter (21" along the "S" path instead of 24") in anticipation of a smaller magnet assembly. Building the coils before the magnets was actually intentional because the thinking was that the coils were the most risky part and the goal was to build both the coils and the magnet in the same video. Instead, the magnet stack was built too large and the "S" coils have shortened arms with a "sticky spot", and so the rotor stops after only a few rotations after being pushed vigorously by hand.
I also observed no acceleration effect at all when the magnet was moving through the horizontal angles (-/+ 45 degrees). The acceleration effect would have been due to the variation of intensity of the radially-directed part of the magnetic field at the outer radius of the "S". I have just remembered now that the reason for this variation was that the arms were to supposed to have reached all way to at least the "center plane" of the coils as one can observe in the S.H.O. Drive logo, which would cause a weakened intensity in the radial-directed part of the magnetic field at the "center plane" relative to its strength at the upper and lower parts of the "S". Also, it was known that the side-fluxes cutting through the central portion of the "S" would generate fields at the central plane opposing the rotation of the magnet, and in the actual build, it was these central fields that dominated due to the larger radius of the "S" in addition to the absence of flux cutting through the "S" hands when the magnet is in the horizontal position, flux cutting that would have helped the acceleration of the magnet through the horizontal angles if the "S" hands were formed at the central plane. But alas, the build was wrong!
The great advantage with the new design at (https://www.youtube.com/watch?v=huy53KdwAE4) is that it lacks any sort of sticky spots. In this newer design, the coil magnetic fields that dominate are the ones located at the outer radius. This is due to the tighter packing of the S-shape as compared to the older design. However, the magnets I had originally purchased were intended to make the magnet stack of 6" x 1.5" x 1.5", and they are unstable when set side-by-side horizontally, which is why I had bought brackets in anticipation of this problem. When I attempted to fit this "square peg into a round hole", the magnets decided to form the rod-shaped magnet that I chose not to build. So the next step is to buy magnets capable of easily forming the desired magnet arrangement as per (https://www.youtube.com/watch?v=huy53KdwAE4), and then fold the existing coils into the new design. The magnet pieces will be longer (up to 4" long), but thinner, magnetized through a thickness as small as 1/4". This will aid in the build process, which should be finished before the end of this fall. Sincerely, S.H.O. talk 17:40, 2 September 2016 (PDT) 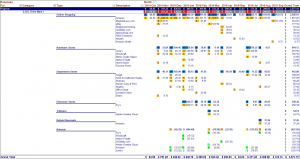